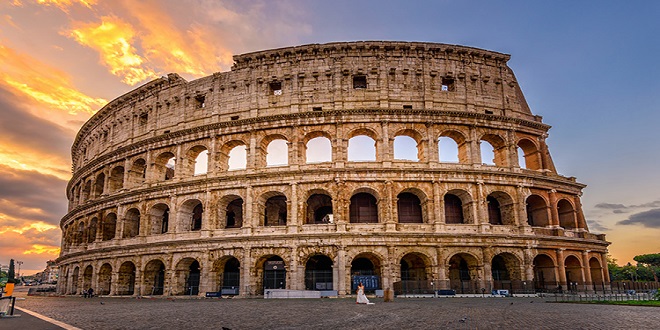 The site of Leptis Magna, on the coast of Libya, has some of the most impressive Roman remains in Africa (see p45). Two miles (3 km) east of the leading site, by a beach where Greek and Roman columns lie stranded like driftwood, stands a magnificent amphitheater, its honey-colored stone blending into its sandy surrounds in sharp contrast to the blue of the sea beyond. Created in the bowl of a former quarry that supplied much of the stone for the ancient city’s buildings, it lies below ground level, with tunnels and holding cells for animals carved out of the rock. Its surrounding colonnade is long gone, leaving a beautifully harmonious saucer of seats.

The theater in El Djem (Roman Thysdrus) dominates the town, visible for miles from the surrounding desert. Rising three stories high, it seems more like a fortress than a palace of entertainment – and indeed, it has been used as one. It is the largest theater outside Italy and was probably the last to be built in the late 3rd century AD. It is also wonderfully preserved, revealing clearly how the animals, gladiators, and actors entered the arena via passages that slope down from outside to the underground galleries. Two lift shafts show where the show’s stars were carried to their deadly moment of glory.

The Romans did not build all their amphitheaters out of stone. In Trier, the most important Roman city north of the Alps and once briefly the capital of the Western Roman Empire, they dug up a hill – using the slope itself to create one side, and heaping up the earth dug out of the arena to make the other. The great basement beneath the hall has been fully excavated and is open to visitors. To descend into its dank, stygian gloom is to feel the chill that must have come over the animals, contestants, and martyrs who awaited their fate here. The arena’s acoustics remain impeccable, and the space is now used for concerts and an annual re-enactment of gladiatorial contests.

On the hot, dusty plains of Spain’s high Meseta lies the lovely ruined municipium of Mérida. This was the provincial capital of Lusitania, and its ensemble of stunningly preserved ruins makes it one of the finest Roman sites in Europe. Its amphitheater, entered through brick arches, is an arid bowl, open to the skies and unshielded by the high walls of later surviving examples. It is complemented by an adjoining circus and 5,000- seat theater, connected to the arena by underground tunnels. The Roman museum has the finest collection of such artifacts outside Italy.

Although you don’t have to see a performance to appreciate the harmonious structure of Verona’s amphitheater, a summer night watching the opera here is unforgettable. For these incomparable events, the building is transformed into a theater, with a wide stage at one end and additional seating arranged across the arena floor, creating an auditorium for 15,000. Although it looks complete, it was once encased in three-story outer walls, faced in pink and white limestone, which provided access to the 42 rows of stone seating. In addition, the theater’s museum shows how its hydraulic system worked.

This is a complete surviving Roman amphitheater in the world. It still entertains the crowds today, regarded as one of the country’s best music venues as well as playing host to a season of bullfights. On a balmy night, it is easy in this incredible atmosphere to forget that the building is 2,000 years old. Its 34 rows of seats are arranged in three tiers, originally socially graded – from the front seats reserved for dignitaries to the distant, high rows allocated to enslaved people. It’s no surprise that every sporting stadium built since then has been modeled on this ideal design.

Nîmes lies on France’s A4 autoroute. Its airport is only served by UK budget airlines, but larger airports exist in Marseille and Montpellier. There are high-speed TGV links to Paris (3–4 hours) and frequent services to Marseille (1 hour) and other cities in the region.