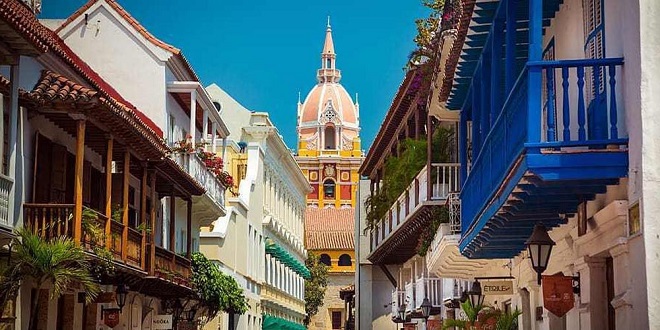 Because of its geography, Colombia is one of the most biodiverse countries in the world. The high Andes mountains splits into three ranges (cordilleras) in Colombia, offering a vertical climate for the cultivation of just about any crop in its slopes and valleys, while at the same time dividing the country into distinct regions which even today have difficulty communicating with each other overland. Between the eastern and central cordilleras flows Colombia’s most important river, the Magdalena, which empties into the Caribbean near Barranquilla; the Cauca River, which divides the western and central cordilleras, meets the Magdalena in the coastal lowlands. East of the Andes lay vast plains called the llanos, which extend into Venezuela. Southern Colombia is mostly rainforest, part of the Amazonian system; thick jungles are also found on the Pacific coast and all along the border with Panama. The Caribbean coastal plain is interrupted by a small but high mountain range near Colombia’s northernmost point, the Sierra Nevada de Santa Marta.

Long before the arrival of Europeans and Africans, many agriculturally-based societies thrived in what is now Colombia. The largest indigenous community was the Muisca, dedicated to raising corn and mining salt in the valleys extending north from present-day Bogotá through the department of Boyacá. Smaller indigenous groups were also present in the mountainous regions between Ecuador and Colombia’s capital. Some, like those who built the impressive statuary near San Agustin and the burial caves at Tierradentro, disappeared before the arrival of the Spanish. Towards the Caribbean coast were other complex indigenous societies, such as the Sinú who constructed intricate irrigation systems, and the Tairona in the Sierra Nevada de Santa Marta, who left the stone foundations of their communities at the El Pueblito site in Parque Tayrona, and at the “Lost City” deeper in the Parque Nacional de la Sierra Nevada — both are popular hikes for travelers.

The conquistadores, and subsequent colonial administrations, certainly treated the indigenous peoples badly — the conquest was bloody, with rape employed to terrorize the natives, and torture applied in order to find the supposedly hidden riches. As in the rest of Spanish America, many died at the hands of soldiers, and many more from the new diseases brought from Europe. Alongside the conquest was a cultural colonization, led by missionary clergy who were charged with converting the Indians and teaching them the Spanish language and customs. Still, as awful as it was, the Spanish conquest and colonization differed greatly from that of the British: the conquistadores became dependent.

Social conditions in colonial New Granada were similar to those in the rest of Spanish America, with a hierarchy based on race. The first murmurs of independence from Spain often began near the top among native-born colonists of European descent — the criollos. They controlled the local economy, but were generally shut out of the colonial government, which was dominated by Spanishborn officials. Travel to Europe by members of the criollo elite brought Enlightenment ideas into the mix. New Granada then followed the pattern seen in the rest of Spanish America during the years of the struggle for independence: after Napoleon toppled the Spanish government in 1808, cities and towns set up juntas that declared their loyalty to the deposed king, Ferdinand VII. These juntas pointedly included criollos in their leadership, giving locally-born notables their first experience of political leadership — in Bogotá, this occurred in 1810, on July 20, which is a national holiday. As the situation in the mother country did not change, various juntas took the step to declare outright independence (the first city to declare independence in Colombia was Cartagena, in 1811 on November 11 — another holiday). The newly independent cities and provinces soon fell into civil war over how much power the central government should have, and most were quickly reconquered when Ferdinand was restored to power in Spain after Napoleon’s final defeat in 1815.

For most of the nineteenth century, the country was in a shambles, with frequent partisan civil wars, local and regional uprisings, and governmental ineffectiveness — as well as continued economic underdevelopment. The frequent unrest discouraged international investors, while wealthy Colombians took advantage of any crop that seemed to have promise as an export. A series of booms began with tobacco in the 1840s, followed by indigo, cotton (during the U.S. Civil War), and quinine in quick succession until the 1880s. Most local merchants and hacienda owners who invested in these booms looked upon them as get-rich-quick schemes, and without making the proper capital investments to maintain quality and quantity, boom soon became bust.

By this time, widespread cultivation of coffee was slowly improving the economic situation. The coffee business changed the attitudes of Colombian investors: it was not only profitable and an ideal crop for mountainous Colombia, but planters had to wait four to five years for coffee bushes to begin to produce beans — it forced a capital investment. Huge coffee plantations were first established in northern Colombia along the Venezuelan border and in the lower altitudes near Bogotá and in Antioquia. In the region of the Antioquian colonization, small paisa farmers found coffee to be a particularly lucrative cropColombia’s tropical location allows coffee bushes to produce beans twice a year, providing enough revenue for a small holder to survive. Today this region is known as the “Eje Cafetero” — the center of coffee production. “Juan Valdez” of the Colombian Coffee Growers Association is based on fact — although we only see him and his burro, his entire family was involved in coffee cultivation.

Previous articleActivities in colombia
Next articleQueensland & the Great Barrier reef