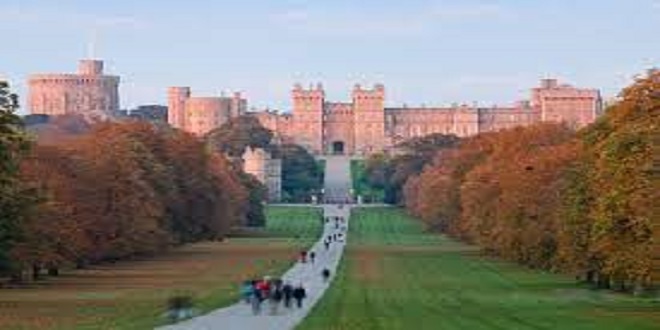 But if swimming in the river at Eton and Windsor fell out of favour after the 1950s, today, as at Henley, Marlow and Maidenhead, it’s a popular place for massparticipation events. ‘Windsor is such an iconic centre, ’ says John Lunt, founder of Human Race, ‘it has the castle and it’s great geographically and historically.’ When he launched the Windsor Triathlon in 1991, ‘we needed a place to swim; if there had been a lake in Windsor it.

Windsor has also been a memorable spot for those passing through the town after days submerged in the river. For Lewis Pugh arriving here in 2006, having swum from Lechlade, it was definitely a high point. ‘The Thames gradually descends; the source is only 110 metres above sea level and it has a long way to slowly descend across fields and meadows to the North Sea. It’s not like the Ganges, for example, which descends from high in the Himalayas and on either side there are valleys, glaciers and temples.

Sensory deprivation in the Thames, the water was mudbrown so I saw little underneath me and when I took a breath there was nothing except six foot of muddy banks on either side, that’s it . . . But then I hit Windsor and came round a bend in the river and saw the swans and there rising out of the mist was Windsor Castle! I told the Queen about that later, and her face lit up.’ Charlie Wittmack had a similar experience during his world triathlon in 2010: ‘when you swim your head is in the water, you can’t see anything all day, you can’t hear anything all day. All you’re left with is your

It’s a bitter April morning as I approach Hampton Court, on board the Richmond Royale. It’s the first time i’ve seen the Thames so uninviting; even the seagulls look frozen. Inside the boat the sides are lined with red leather seats, the floor covered in patterned carpet like an old-fashioned pub. It’s so cold I can see my breath in the air. I chat to a crewmember, a young man who lives locally but has never swum in the Thames. He knows of three people who ended up in hospital recently after jumping into the river. One incident happened downstream at around 8 p.m. On a hot day: ‘we saw a man in the middle of the river, with his mates outside a pub cheering him on, then on our way back we saw an ambulance and he was being given CPR. He died the next day. It’s the shock of the water when you’re drunk.’ Outside the snow-splattered window the river looks like dull scratched metal.

Being skilled in Swimming, they were all drowned.’ But others found it a perfect spot. ‘If there be a situation on the whole river between Staines Bridge and Windsor Bridge pleasanter than another, it is this of Hampton, ’ wrote Daniel Defoe in 1724. ‘The river is high enough to be navigable, and low enough to be a little pleasantly rapid; so that the stream looks always cheerful, not slow and sleeping, like a pond. This keeps the waters always clear and clean, the bottom in view, the fish playing and in sight.’ There is little cheerful about the scene today and no bottom in view as I step off the boat. There’s no sign of any fish playing either, although porpoises were recently reported downstream at Twickenham, where sightings go back to at least 1896, when the press warned it was illegal to shoot them and that ‘porpoise meat, though doubtless nourishing and perhaps toothsome, has long gone out of fashion’.

Bran, ‘swimmer, waterman and ferryman at Hampton’ , escorted the American Davis Dalton in his attempt to swim the Channel, accompanying him in a small punt. When Dalton arrived in England he fainted on the beach at Folkestone after a twentythree-hour crossing, the British press disputed his swim and it was never officially recognised. The following summer, however, Dalton was in the Thames, this time swimming all the way from Blackwall to Gravesend on his back. Today this part of the river is also the site of an annual mass swim, 2.25 miles from Hampton Court Palace to Kingston upon Thames, again staged by Human Race and described as one of the more challenging events in the open-water swim series.

Previous articleAnnette Kellerman, the champion Australian swimmer, made her British
Next articleThe medicinal properties of some of the green leafy vegetables is discussed

Annette Kellerman, the champion Australian swimmer, made her British