Annette Kellerman, the champion Australian swimmer, made her British 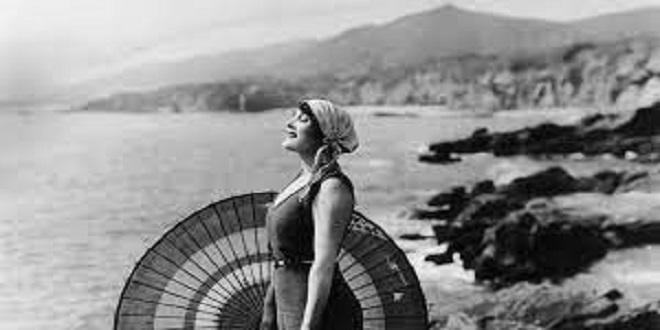 Debut in the River Thames

River racing was put on hold during the First World War, and then the growth of municipal baths drew people away from rivers and into purpose-built pools. Yet still in the 1920s championships and endurance swims continued, and river swimming was a popular family activity until at least the 1940s.The Thames became a seaside resort for Londoners, with beaches at Putney, Tower Bridge, Greenwich and Grays. When the children’s beach at the Tower of London opened in 1934 King George V declared that children would ‘have this tidal playground as their own for ever’. In 1957 the river was declared biologically dead, bombing during the Second World War had damaged.

Swimming spots were closed down, and although by now Thames water quality was improving, this was a trend that continued into the 1990s. Yet in the past decade or so we have returned to the Thames, with thousands of swimmers, many of them triathletes in wetsuits, taking part in mass events at Windsor, Eton, Hampton Court and the London Docks.

Nowhere near the scale had it used to be, but it is back: from the Bridge to Bridge swim between Henley and Marlow, to the Great River Swim from Cheswick Pier, and the Crow stone Crawl in the Thames Estuary. Wild swimming is more popular than it has been for decades, and the River Thames is what Kate Raw, founder of the Outdoor Swimming Society, calls ‘a swimming super.

Despite the modern cult of Health & Safety, and signs specifically banning swimming, people continue to enjoy the Thames. For many it’s the memory of a childhood pleasure that takes them back, as if returning to the world of The Wind in the Willows in which the river – a ‘sleek, sinuous, full-bodied animal, chasing and chuckling, gripping things

It is also the busiest inland waterway in the UK.’ There are passenger vessels ‘which carry over six million people a year and 1,000-tonne barges carrying freight. In this environment, swimming in the Thames is akin to rambling on the M25.A hazardous undertaking. But others question if swimming in the Thames should be a criminal offence when it has always been a natural

In recent years Thames swims are more likely to be for stunts and protests, from John Prescott’s 1983 swim against dumping nuclear waste in the sea, to Trenton Oldfield’s disruption of the Oxford vs Cambridge boat race in 2012. When, in 2006, Lewis Pugh became the first person to swim the entire length of the Thames it was to bring attention to the issue of climate change.

That he is a celebrity and the enormous publicity that surrounded his swim for Sport Relief raised its profile. And because he fell sick, it also put a lot of people off, convinced they too would get ill. The biggest fear among non-river swimmers is contracting Weil’s disease, a severe form of leptospirosis, a bacterial infection spread by animals.

Swimmers can potentially catch the disease from water contaminated with the urine of infected rats, but leptospirosis is rare in the UK; forty-four cases were reported in England and Wales in 2011, of which fifteen originated overseas, and none was fatal. Others swim for different reasons. Matthew Parris made a midnight excursion across the Thames in 2010, just to see if it could be done, while artist Amy Shamrocks is planning a mass swim across the Thames from Tower Bridge. ‘It’s our river, ’ she says. ‘It is the whole reason we are here in London, it’s the reason for the metropolis.’ Others still swim the Thames to win a bet or for a dare, just as in Victorian times, individuals such as Peter Rae who in 2003 swam across the estuary from South end to Kent – and back.

This book is a trip downstream, from a marshy meadow in Gloucestershire all the way to South end Pier, an exploration of how we once used the river, why we stopped, and the reasons behind the current revival. This is a history of our relationship with the Thames from a swimmer’s perspective.

Previous articleHoliness Is to Have a Christlike Character
Next articleHuman Race chose Windsor as the location for one of its annual swims, with the background of the iconic Windsor Castle.