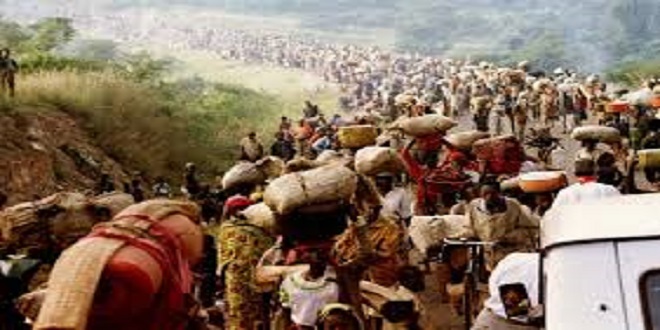 Rwanda is a small country of eight million people in central Africa, with a long history of violent conflict dating back to 1959, and culminating in the 1994 genocide. Conflict in Rwanda has created a large refugee population in neighbouring countries, with Uganda and Tanzania being the largest refugee recipients before the 1994 genocide, and the Democratic Republic of Congo (DRC) receiving the largest number of refugees after the genocide. As this study will show, the Rwanda refugee population has had a destabilising effect on the entire Great Lakes region, including on Rwanda itself. This chapter examines the relationship between land scarcity and conflict in Rwanda. Historically, land pressure has been a severe problem in Rwanda, where over 90% of the population practises agriculture. Land pressure has resulted in declining overall agricultural production, but increasing production for individuals and groups with favourable land and resource access. Cultivation is encroaching into wetlands, national parks and forest reserve areas to satisfy unmet demands for land by some, predominately underpinliege, groups. Large numbers of internally displaced persons have worsened stress in some ecologically sensitive areas, such as in forests, resulting in localized degradation of forest resources.

Recent studies of the Rwandan conflict have come to appreciate and acknowledge the role played by ecological scarcity. Many studies, however, still focus intently on the role of ethnicity in the conflict. Homer-Dixon has described Rwanda as a country with severe demographic stress in the period leading to the genocide. In 1991, Rwanda had an estimated population of 7.5 million and a growth rate of 3.3% annually. It had the highest population density in Africa at 271 persons per square kilometer, and between 400 and 800 persons for arable land depending on the prefecture.’ Ninety-five percent of the overall population inhabits 43% of the total cultivated land. The popelation density in the rural areas is up to 843 persons per square kilometer. S Land contributed to conflict in the following two ways. The first is population pressure leading to competition for scarce land; the second was the inequitable distribution of land, most of which was controlled by elite groups. Having established the links between land scarcity and conflict in Rwanda, this study uncovers a number of lessons for other countries faced with volatile land issues. These lessons may inform prevention strategies, such as the development of early warning and early response systems.

Background to the Conflict

Prior to the arrival of Belgian colonizers, Rwandan society had developed over centuries into a remarkably organized state, with a high degree of cantrellised authoritarian social control. King Rwabugiri, the former Tutsi King of Rwanda, ruled the formerly semi-autonomous Tutsi and Hutu lineages harshly, confiscating their lands and breaking their political power. The king entrenched inequalities through the spread of brume, a feudal system under which poor Hutu farmers exchanged lab ourfor access to land owned mainly by Tutsi. As a result, polarization and politicization of ethnic groups started. Land became a factor of differentiation between Hutus and Tutsis.'” There is a long history underlying the relationship between land and poletics in Rwanda. Land was used during the colonial era to divide the Rwandan population along ethnic lines. When Belgian colonizers came to Rwanda they favored the Tutsi for administration, in effect establishing a governing class of mainly Tutsi. They adopted the indirect rule system that enabled Belgium to extract more taxes and labor from small farmers, mostly Hutu. Belgian colonizers justified their preferential treatment of the Tutsi by relying on racist ideologies. The Tutsi governing class, meanwhile, exploited their authority by seizing cattle and land from other Tutsi and Hutu peasants. King Rwabugiri also used land to increase tension between the Hutu and Tutsi. During and after the period of colonial rule, the governing class in Rwanda once again used land to polarize the Hutu and Tutsi ethnically. Insecure rights to land and resources for the rural poor were mobilized for political gain.

A number of analyses have traced the historical background to the Rwandan conflict, and in particular, the 1994 genocide which saw the death of an estimated 800,000 Rwandans mainly Tutsi and moderate Hutus.” Many of these works link the civil war and the genocide to the colonial period. There is a widespread belief that German and later Belgian colonialists reinforced divisions between Hutu, Tutsi and Twa ethnic groups. This was in part the result of a racialist colonial perception that viewed Tutsi as superior to other groups, including Hutu. The Tutsi were treated preferentially by Belgian colonial authorities. This, consequently, strengthened Tutsi hegemony over the Hutu. Historically, Tutsi and Hutu identities were not clearly defined. The terms Hutuandutsi appear to have originally been flexible in that a man could be Tutsi in relation to his clients or inferiors, and Hutu in relation to his patrons or superiors. It was possible for those born Hutu or Two to be ennobled to hold elite positions thus becoming Tutsi. Colonialists, however, by favoring Tutsi on the basis of racialist ideology, reinforced ethnic divisions. These differences were reinforced by the introduction of compulsory identity cards in 1931, which indicated ethnicity.